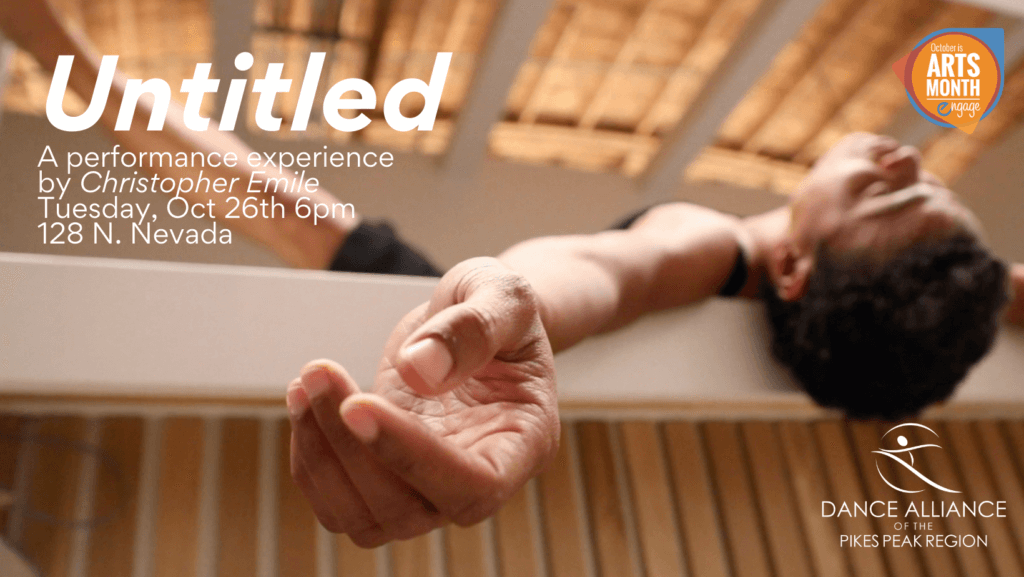 Choreographer and multimedia director Chris Emile shares his new work blending performance, narrative, and video, Untitled, Tuesday, Oct 26th at 6 pm at The Movement Gallery. The film explores radical expressions of empathy through performance, interviews, and personal storytelling by four performers. In this one-hour event, Emile demonstrates the creative process behind ‘Untitled’ with a live performance, followed by the premiere of the film and a Q&A with key members of the film’s creative team moderated by Jordan McHenry.

Based in Los Angeles, Chris Emile is an active director, choreographer, educator, and performer. He received his formidable dance education from Lula Washington, Karen McDonald, the Ailey School, and holds a BFA in Dance from the Alonzo King LINES Ballet/Dominican University BFA program as a member of the inaugural class. As a dancer, Chris has performed with Alonzo King LINES Ballet, Complexions Contemporary Ballet, Morphoses, Luna Negra Dance Theater, and BODYTRAFFIC performing the works of master choreographers such as Nacho Duato, Idan Sharabi, Stijn Celis, Barak Marshall, and Gustavo Ramirez Sansano.

He is the co-founder/curator for the movement-based project No)one. Art House where he has programmed site-specific performances, films, educational workshops, and movement-based installations with institutions such as Hauser & Wirth, the Getty Museum, SAINT HERON, Refinery 29, St. Germain, the 14th Factory, and the California African American Museum among others.

As an educator, he has been a guest lecturer at the California Institute of the Arts, USC, UCLA, AMDA, Loyola Marymount University, Pomona College, Boston Conservatory, and UC Irvine. He also coordinates a week-long workshop every summer entitled CIPHER that engages movement-based artists in an intense daily practice of meditation, movement research, and composition study.

Donate
Tickets to SALT
We use cookies on our website to give you the most relevant experience by remembering your preferences and repeat visits. By clicking “Accept All”, you consent to the use of ALL the cookies. However, you may visit "Cookie Settings" to provide a controlled consent.
Cookie SettingsAccept All
Manage consent

This website uses cookies to improve your experience while you navigate through the website. Out of these, the cookies that are categorized as necessary are stored on your browser as they are essential for the working of basic functionalities of the website. We also use third-party cookies that help us analyze and understand how you use this website. These cookies will be stored in your browser only with your consent. You also have the option to opt-out of these cookies. But opting out of some of these cookies may affect your browsing experience.
Necessary Always Enabled
Necessary cookies are absolutely essential for the website to function properly. These cookies ensure basic functionalities and security features of the website, anonymously.
Functional
Functional cookies help to perform certain functionalities like sharing the content of the website on social media platforms, collect feedbacks, and other third-party features.
Performance
Performance cookies are used to understand and analyze the key performance indexes of the website which helps in delivering a better user experience for the visitors.
Analytics
Analytical cookies are used to understand how visitors interact with the website. These cookies help provide information on metrics the number of visitors, bounce rate, traffic source, etc.
Advertisement
Advertisement cookies are used to provide visitors with relevant ads and marketing campaigns. These cookies track visitors across websites and collect information to provide customized ads.
Others
Other uncategorized cookies are those that are being analyzed and have not been classified into a category as yet.
SAVE & ACCEPT